20th July 2020 marks the 46th anniversary of the Turkish invasion of Cyprus and as I was there I thought, once again, as I did last year, give you a personal account of what was going on around me.

I am not a political person, I was on honeymoon in 1974 at 20 years old and had no idea about anything….so my account will not be about politics but the opposite, my own experiences as a British born Cypriot.

This photograph is of a tank in Nicosia, Grivas Digenas Avenue, to be precise, taken by my husband, where my newly married sister (she’d only been in Cyprus exactly one year) and her Cypriot born husband had their Pizza Cafe (and still own it to this day). They lived above the shop, there must be at least 20 flats there.

My husband is a photographer, normally shooting motor sport cars and adverts in London, but this was in the middle of something we both were thrown into by sheer bad luck: I knew our marriage would not be boring but this was ridiculous!I don’t know if you’ve ever experienced a tank being driven full speed near you but it’s scary. The noise alone makes you shiver and the whole earth, beneath you, shakes.

A coup had taken place 5 days before, 15th July 1974, by the then Junta (Greek Army) who had set up most of their colonels, funnily enough, in the block of flats we were living in.

The previous 5 days were scary enough as the Greek Army and Cypriot ‘Enosis’ fighters took men to prison and all weapons were seized from people’s own homes. There was a curfew and everyone breaking that curfew would be shot, no questions, just shot. So there we were, with no weapons and the Turkish Army invading the North side of Cyprus….but not only the North, Nicosia too.

All the weapons that the Cypriot Army, including tanks, were now in the hands of the Greek Colonels and their Cypriot sympathisers. All the guns normally used for Army training and hunting were confiscated from ordinary people. The dilemma for the Colonels was, do they release all the prisoners who were against Enosis and did not want the right wing Greek Junta to run Cyprus, or do they try and fend off the Turkish army on their own? Who would end up fighting and killing who if they were released from prison? Words spoken through the radio would end that dilemma, the prisoners were to be released, armed and sent North to fight the Turkish invasion. There was no time to fight a civil war, this was all hands on deck and differences sorted later.

They were faced with a mighty Turkish army who had thrown everything into this invasion. We could see from the rooftop of the tall block of flights, aeroplanes bombing the newly finished Nicosia Airport. We could see parachutes coming down from the planes and the response of the Cypriot army trying to regain some kind of response but the whole of Cyprus was still reeling over the coup, the topping of Makarios, the Greeks taking over the radio and TV stations and the lack of any disciplined Army to stop the onslaught that was to come.

The Cypriots did not stand a chance. They had antiquated Army equipment. The Greek Generals were ill equipped mentally and physically, to deal with the Turkish invasion and the ordinary Cypriot people who were enjoying their summer were trapped in a horrific nightmare along with thousands of tourists in Kyrenia, Famagusta and all along that beautiful coastline.

A friend’s hotel was right in the middle of it all on the coast of Kyriania and as they had mainly British tourists there, they put up the British Flag on the roof of the hotel: within days this flag would be destroyed by gun fire from the Turkish planes….they didn’t care who you were, they were there to take as much of Cyprus as they were told to and they certainly did, easily.

No-one had any guns in their homes anymore. The Turkish army simply moved in and stayed as they had no opposition but helpless families who were taken by surprise. There were no sign of the ‘Guarantors’ i.e. America & Britain stepping in the help.

Hopelessness set in for many families as they tried to escape the Turkish army. Hordes of people in cars driven out of the North came to the South of the country. Tents were set up for them, or the refugees were taken in by everyone who had a room in their homes. Meanwhile, back in London, my parents and so many other families here in the UK, were worried sick about relatives. Phone lines were cut by the coup previously so that no-one could call for help….there were no mobile phones in 1974 or else if there were 99% of the population did have them.

We managed to get to a phone line that was working and could call Greece but no other country. So I called a friend of my father’s and he called my parents to tell them we were all safe. In fact it was a miracle, as the day before the coup we were in Kyrenia at our friends hotel but on a whim we decided to come back to Nicosia.

Everything around us was in chaos. There were gun shots, bombs going off, cars dashing around, Army troops rushing around, Turkish planes flying overhead, which to be honest were the scariest thing I have encountered. You never knew what they would do as they swooped low and then ended up bombing further down the road, mainly at the airport.

If you read my account of how we got out after the second round of Turkish attack, I won’t bore you again with the details…..suffice to say that we got back to London much older than our 20 year old bodies.

We witnessed an event that would be in our hearts and minds for the rest of our lives.

We witnessed how Cyprus helped Greece become free of the Junta by sacrificing itself. I worked tirelessly to re-house refugees when I got back. I worked tirelessly with the Missing Persons committee for years. So I am now 66 years old and want some peace. But every time the 15th July (the coup) and the 20th July (the Turkish invasion) come around, I cannot help myself being transported back there to 1974.

We were lucky, there are still over 1000 Cypriot bodies not recovered, sadly on both sides, we could have easily be one of those statistics.We must never forget those who are still grieving and those who lost their homes.Cyprus never stood a chance, the odds were certainly against them.

Due to COVID-19 Novel Coronavirus, we have not been able to hold our annual dinner and dance this year. However, we bring you some pictures and articles, as well as some information from our sponsors on the following link

The Famagusta Association GB and the APPG for Cyprus would like
to cordially invite you to our event in celebrating the Independence Day of Cyprus with the participation of Members of Parliament on a discussion on Cyprus and Famagusta in particular.
on
Tuesday 22nd October 2019
7.00 pm to 8.30 pm
at
The House of Commons, “Grand Committee Room” London SW1A 0AA

Please present this invitation at the Cromwell Green Entrance. There is no public parking at the House of Commons. Please allow 20 minutes to pass through Security.

This year marked the 37th annual Cyprus Wine Festival held at the Lee Valley Athletics Centre in Enfield, and the Famagusta Association was there ready to tell everyone about our association and all the exciting things we are involved in.

We also had the opportunity to meet key people in the Cypriot community, who were happy to hear about what our association has been working on, some including the Cypriot High Commissioner Euripides Evriviades and Costas Kadis the Minister of Agriculture, Rural Development and Environment to Cyprus.

For those of you who couldn’t make it, and were not able to hear about the ongoing petition we have regarding the Right to Vote in any Cyprus Settlement Referendum for those living in exile or in Diaspora, please do feel free to go online and sign our online version of the petition at: http://chng.it/XXrhzCZL

We thoroughly enjoyed meeting everyone, and look forward to seeing more people at our upcoming events! 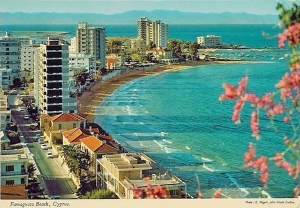 A view of Famagusta’s paralia